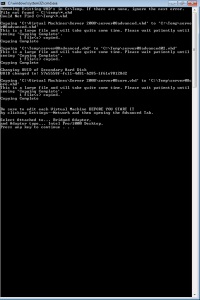 Here is a batch file I created for my TAFE course which:

For some reason the copies seem to take quite some time despite explorer displaying them as having successfully copied far sooner than is indicated by the script.

After about the second version I swapped from using solely programmatic loops to using a mixture of those and goto’s. Though I personally can’t stand the spaghetti code caused by goto, I was led to believe the loops were adding unnecessary overhead.

And so I decided to use the goto’s to emulate something akin to a function call which allowed me to further refine my code into a single loop with all of the required information being passed to it by variables. This allowed me to essentially modularise the VHD setup area.

Now a new VHD can be added by duplicating a few lines of code and changing the values of variables where appropriate, and adding in a prompt asking how many of them the user wants

Here are the various versions of the script as it has progressed, from newest to oldest (though the very oldest was overwritten).